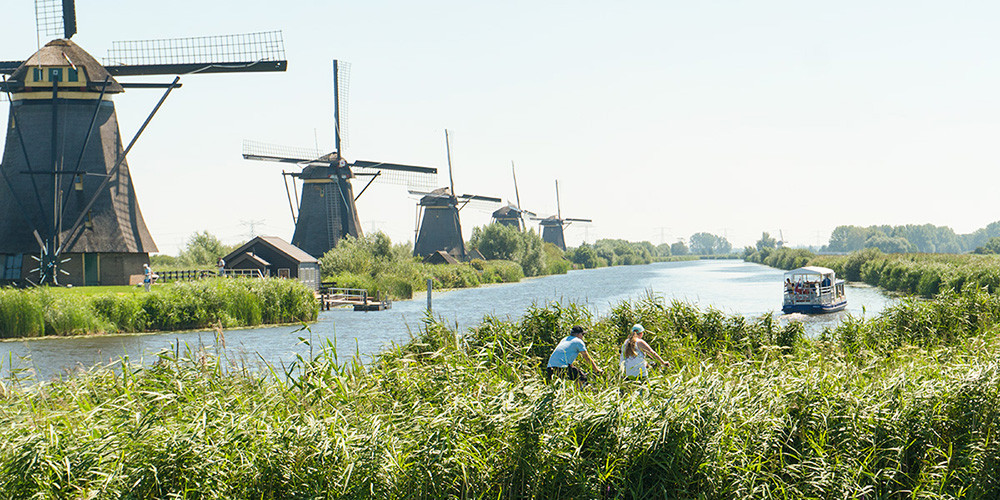 Travelling in & around bike-friendly Holland

The Netherlands are known for mild winters and moderate, warm summers - a climate mainly determined by being so close to the sea. The prevailing wind direction is west / south-west and it never really rains for a long time at a stretch.

It's a climate which is cyclist-friendly for most of the year, except perhaps winter, if you tog up in appropriate clothing. As rain tends to come in short showers, getting dry quickly is not usually much of a problem - just see it as a good excuse to take a short break in a café, before continuing your journey!

It's nice, useful and appreciated if you set out on your trip around Holland with some Dutch words up your sleeve (or on the tip of your tongue even), but to be fair, most Dutch people and nearly all younger Dutch people speak English. So don't worry - communication really won't be a problem during your stay. As long as you enjoy and respect our Dutch ways and culture, you'll generally find people nice and friendly and interested in meeting you...

And that goes for any visits you might need to bicycle repair shops („Fietsenmaker“) too! Because the Dutch love to cycle  - we even mostly own more than one bike per person! - there are countless shops where you can purchase cycling accessories, spare parts for repairs, cycling gear, helmets and all sorts of other cycling kit imaginable. If there's a problem with your bike (a 'fietspech'), then just make a friendly request for help and it will be yours! Repair shops often even have bicycle pumps in front of the shop, so you can help yourself to pumping up those tyres.

Dutch tourist information offices can be found located in the city centres of most of our medium and larger cities and are often to be found on the market square. For tourist information centres / facilities in Holland, look for the VVV signs (our equivalent of TIC in the UK - VVV = Vereiniging voor vreemdelingen verkeer).

The VVV offices have information about things to see and do in the area, plus events and accommodation etc. Please note that some information material - particularly maps - are charged for. The VVV offices are open until 5/5.30 pm  during the summer months.

Taking your bike on a train

If the weather just isn't on side, or if you're just not in the mood to cycle, it's generally easy to skip a few miles on the bike by taking the train. You can travel with your bike on board on almost all Dutch train connections and getting on and off with your bicycle doesn't usually create any problems, as the carriages have good entry points.  Bicycle trailers may be also taken on trains.

In July and August, bicycle transport is possible on almost all trains without exclusion periods, although space for bikes can sometimes be hard to come as it is so popular. Outside of these months, there are some restrictions to taking your bike on the train. At weekends, you can take your bike on the train at any time of day, but on weekdays, the following restrictions apply: no bike transport on any regional train from Mon-Fri between 6.30 - 9.00 am and 4.30 - 6.00 pm. The restriction does not apply to international traffic.

Bus tickets can be bought directly on the bus from the driver. This is the easiest way for visitors to buy a ticket. If you plan to travel frequently by bus, then a OV-Chipkaart is a good option. It is a special ticket which is valid on trains, trams, buses and on the underground (metro).It's important to know that you must always check in and out with an OV-chipkaart by holding your card against the screen on a gate or card reader.

In Holland it is usually not possible to take your bicycle with you in buses.

Setting out on arrival - from Amsterdam Airport (Schipol)

Trains depart regularly from the on-site train station platform beneath the Amsterdam Schiphol Airport and you can be in the city centre of Amsterdam in just 15-20 minutes.  (Single ticket € 3.30)

Buses for central Amsterdam depart every 15 minutes from the Schiphol Plaza in front of the arrival/departure halls. (Tickets available on the bus, € 4.00 ).

Setting out on arrival at Amsterdam Centraal (Main Railway Station)

Amsterdam Centraal railway station is situated right alongside the historic canal quarter of the city.

Buses depart from outside the front or rear (Uitgang / Exit Noord) of the station. There are big signs for the different bus directions and friendly staff to help you, if you have any questions.

Taxi ranks are located at the front of the station building.

Tulips in Amsterdam. Round Edam cheeses. Colourful clogs and typical Dutch windmills … No matter how much of a cliché some images of Holland may seem, they’re still a loveable set of classics. Look at it another way and our rich horticultural heritage, traditional artisan foods, rural crafts and the story of our landscapes have simply adopted an icon or two.

Whether you visit Holland with a bucket list of must-sees or prefer to just go with the flow, taking in Dutch colour, history, delicious local fare and traditions as they present themselves along the way, there are some things which will just brighten up you day – the Dutch way.

Back in the early 1900s, there were more than 10,000 windmills in use in the Netherlands as grinding mills, sawmills, oil mills or pumping stations. Holland owes much of its landscape to these early feats of engineering as they enabled the country below the sea level to be drained. Today, there are still 1,000 historic windmills in Holland.

Polder is the term used for an area of land reclaimed from the sea. In effect, it’s artificial and man has won it back from the natural world. One famous example of Dutch polder landscape is the island of Schokland in the Netherlands which was included into the UNESCO World Heritage List in 1995.

Did you know..? About 26% of the Netherlands is below sea-level. If you arrive at Schipol Airport, you are technically already several metres below!

In springtime, wide, colourful tulip fields are a true feast for the eyes. It is not the flowering tulips, but the bulbs that have been cultivated and traded in the Netherlands since the 16th century. Up until 1637, coveted bulbs created "tulip mania" as aristocracy all over Europe craved forever intricate tulip colours and styles. Like taking risks on the stoke exchange, the situation ruined many a citizens and wealthy merchant with spiralling prices and speculative trade. Today, bulb-fields and displays like the world famous Keukenhof attract visitors from all over the world. Hyacinths, narcissus and even orchids are also grown on huge scales and the beautiful tulip has become a symbol of the friendly and colourful nature of Holland.

Did you know..? Holland has a National Tulip Day in January when everyone is invited to pick their own tulip for free from a special ‘picking garden’ in Amsterdam’s Dam Square.

Bicycles, cycles, push-bikes – they’re a way of life in Holland and the Dutch love them. As a means of transport, they are practically the equivalent of a car in the Netherlands - the infrastructure for cyclists is simply outstanding. The Dutch cycling policy encourages the use of bicycles not only for tourists and leisure cyclists, but for day to day living and commuting. So Dutch people are more than happy to reach for their bike as a means of getting to work or school or heading out to do the shopping.

Did you know..? About 1.2 million new bikes are sold in the Netherlands every year. (Told you we love them!)

Following a decade of rebuilding work, the most famous museum in the Netherlands, the Rijksmuseum - one of the most prestigious museums in the world - reopened in April 2013. The collection of magnificent historic works from great Dutch Masters like Rembrandt’s ‘Nachtwache’ (Nightwatch) is truly amazing and the museum offers a real insight into Dutch history as a whole, but the building itself is worth the visit and real admiration too. It is the work of architect, Pierre Cuypers, who also designed Amsterdam Central railway station.

Did you know..? As well as paintings, the Rijksmuseum is home to fine examples of sculpture, furniture and interiors, fashion and applied arts, weapons and ship models and Asian art.

The ‘Hollandse Nieuwe’ – Not exactly a red herring!

This all sounds a bit fishy. ‘Matjeshering’ is a Dutch specialty and a ‘Hollandse Nieuwe’ is the term applied to a herring only when the fish has a fat content of at least 16% and has been traditionally salted and filleted. It’s considered a fortifying sort of delicacy – or maybe you just need to have a strong constitution. Anyway, we love them and eat such delicious herring with fresh onions or ‘sour cucumbers’ (pickled gherkins). You’ll find them (and us!) often at small stalls at markets or in ports.

Did you know..? If you find yourself sitting on a packed bus or tram, Dutch people would say that you’re sitting ‘like herrings in a barrel’. Sardines are clearly only a popular fish with English speakers.

In former times, cargo ships with flat bottoms and side weights instead of a keel were built with a low draft especially for travelling the ‘Wadden Sea’(Frisian Sea), an expanse of water which can fall dry at low tide. In Holland many of these beautiful old ships have been restored for use as tourist charter vessels and now sail their guests across Lake Ijssel and the Wadden Sea.

Did you know..? The Wadden Sea is a real haven for wildlife. Its extensive mudflats and salt meadows are home to wadders including curlwes and avocets, gulls, ducks and apparently even the occasional flamingo!

... is the colour of the Dutch royal house ‘Oranjen-Nassau’ and generally considered to be Holland’s national colour. It is an expression of Dutch identity - not only in the football world.

Did you know..? The top field of the Dutch flag was originally orange ("oranje boven"). No-one really knows why it was later replaced by red.

Although the Netherlands is often associated with old masters, wooden shoes and gabled houses, it is home to many innovative housing estates and world class examples of modern architecture. The mixture of old and new contributes to the attractiveness of many cities.

Did you know..? Amsterdam’s NEMO Museum for Science looks like a huge ship and was designed by Renzo Piano, architect famed for the Centre Pompidou in Paris.

Cheese specialties from Holland are well known all over the world. And there’s no better way to savour these Dutch delights than directly from the producer. Many cycling holidays with Holland-by-Bike take you right to the cheese producer’s door to get the most authentic taste for the place.

Gouda or Edam cheeses are perhaps the most famous native cheese varieties, but even these can differ greatly in flavour from producer to producer. In Edam, you’ll find a permanent exhibition on cheese production in the "Kaaswaag" (cheese-weighing) building, where you can also try and buy the classic Edam. There are plenty of cheese shops around too – and different cheeses from other local parts of the country too, such as the ‘Beemster’ cheese, which comes from the region around De Rijp.

Did you know..? Holland exports well over 100 million pounds of cheese (500 million kgs) every year.