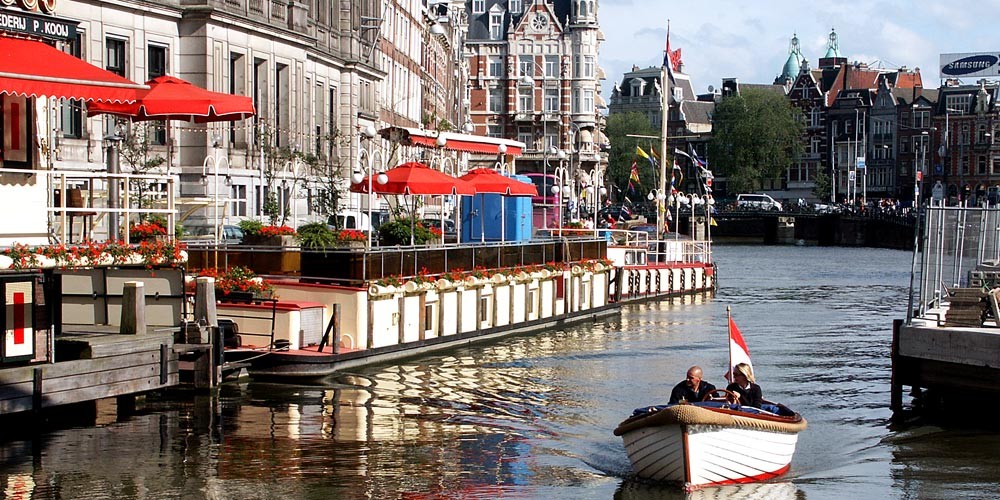 Amsterdam just has to be one of the most interesting capitals in the whole of Europe. Not only is it simply oozing history from more than just its canal-side streets, but it’s a place where ancient and modern brush shoulders with one another, making for one fascinating mix.

Amsterdam old town is easy to explore on foot as the capital’s main sights and the majority of its most beautiful streets are in close proximity of each other.

Here’s some top tips – not just for cyclists! – to get the most out of your visit.

Museums  - just too many to mention!

Amsterdam has over 70 Museums. That means it can be hard to know where to start. These two are an absolute must:

Entirely renovated in the last decade, the Rijksmuseum (National Museum) re-opened its doors to much acclaim in 2013. The fine art museum gives a wonderful insight into Dutch history and culture - a journey through from the Middle Ages to the 20th century in the company of Grand Masters of their times, such as Rembrandt, Vermeer, Frans Hals and many more.
Tickets: Adult: € 17.80 | Admission is free for everyone under 18.

Don’t miss the world's largest collection of works by the world's most popular artist. Amsterdam's Van Gogh Museum includes famous Sunflowers and self-portraits by the great Vincent himself and, as well as rooms full of his paintings and drawings, there are collections of work by his artist friends and contemporaries such as Monet and Manet. Learn about his life, loves and key influences.
Tickets: Adult: € 17.- | Admission is free for everyone under 16.

Amsterdam is bustling at the best of times, but it has a whole host of vibrant and colourful markets, selling everything from books to bulbs and cucumbers to curios. Here’s just a few of our favourites to check out for some atmosphere and perhaps even a real bargain or two.

When? Mondays and Saturdays.
Where?  At the foot of Noorderkerk.
Who? A market frequented by locals and not so touristy. On Saturdays, it’s the place to meet up for a spot of shopping, a jolly good gossip and hearty helping of pea soup.
What? Many regional and seasonal products, antique, crafts and more.
Verdict: Our favourite market – so it must be as Dutch as we are!

When? Mon-Fri 9 am - 5.30 pm; Sat from 8.30 am.
Where?  On the Waterlooplein (The clue’s in the name!)
Who? Lots of stalls, mostly tourists, but worth a visit.
What? Secondhand stuff and new things, including books, clothing, curios, CD's, DVD's and more.
Verdict: Can be very crowded - so enjoy it, but be aware of pickpockets just as you would in other capital cities.

When? Mon-Sat 9.30 am - 5.00 pm
Where?  Along the Albert-Cuyp-Straat, 'De Pijp'.
Who? Locals and visitors alike.
What? Nice flea market with over 300 stalls in what was once typically a working class district of Amsterdam. Today it has become multicultural and is regarded as the Latin quarter of Amsterdam.
Verdict: High on the ‘cool place to be’ scale. The area has an international atmosphere of art, shops, restaurants, cultural institutions, so as well as the market, be sure to check out the side streets for some chilled café moments and some different sort of shopping.

When? Mon-Sat 9.30 am - 5.00 pm
Where?  On the Singel canal between the Koningsplein and the Muntplein.
Who? Locals and visitors alike.
What? Probably the only floating flower market in the world! This famous flower market has been going since 1862 and is the place to buy bulbs, souvenirs, seeds and flowers.
Verdict: Have your camera ready – this place is really colourful stuff!

If you like modern architecture- or even if you don’t this is worth the spectacle and the impressive views! Check out the stunning NEMO Museum for Science. Built like a huge ship, you’ll find located at the port of Amsterdam. It was designed by the Italian architect, Renzo Piano, who also built the Centre Pompidou in Paris.

On the top floor, there’s a café where you can look out over the city – a great place to relax and drink in the views as well as ‘een Kopje Koffie’ after a quick tour. Not only are small snacks and drinks available, but you’re also allowed to bring your own food, so why not plan a picnic?  Outside of the Dutch school holidays and some public holidays, entrance to the roof terrace is free of charge.

A Real Classic: Take a Canal Cruise through Amsterdam

Few experiences can top getting a wonderful first impression of Amsterdam or a new take on Holland’s capital than a gentle cruise along the city canals.

Standard canal cruises take around an hour, during which time you'll float though Amsterdam's UNESCO protected canal ring and get to admire the city’s historic façades and many beautiful  bridges from the water.

Mooring Place Locations in Amsterdam (for our Boat & Bike Tours)

Alight at Central Station (Amsterdam Centraal Station). The hotel barges and boats are berthed in the harbour area behind this railway station and are easily accessible by bus or by taking a small (free) ferry.

Full details about where your ship has moored will be included in your travel information.

Mooring at the Sumatrakade / Azartplein (5): From the railway station (Centraal Station), take GVB bus line 48 in the direction of ‘Borneolaan’ as far as stop (Azartplein) 60. The bus journey takes about 12 minutes. A bus ticket (ask for a "1-uur-kaart") can be purchased directly from bus driver. 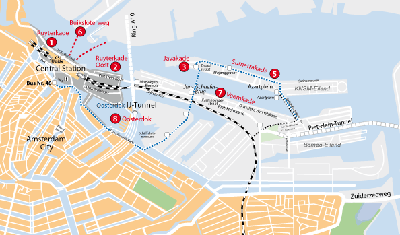 Mooring at the Javakade (3): From the railway station (Centraal Station), take GVB bus line 48 in the direction of ‘Borneolaan’ as far as stop Tosaristraat.

Mooring at the Veemkade (7):  ): From the railway station (Centraal Station), take GVB bus line 48 in the direction of ‘Borneolaan’ as far as the Jan-Schaefer-Brug stop.

Mooring at Buiksloterweg (6): This mooring can be reached with a small free ferry which leaves from behind the station. See www.pontveer.nl for exact ferry timetables. The Centraal Station - Buiksloterweg ferry departs every 6 minutes and takes about 5 minutes. Bicycles, electric bikes and luggage are transported at no extra cost.